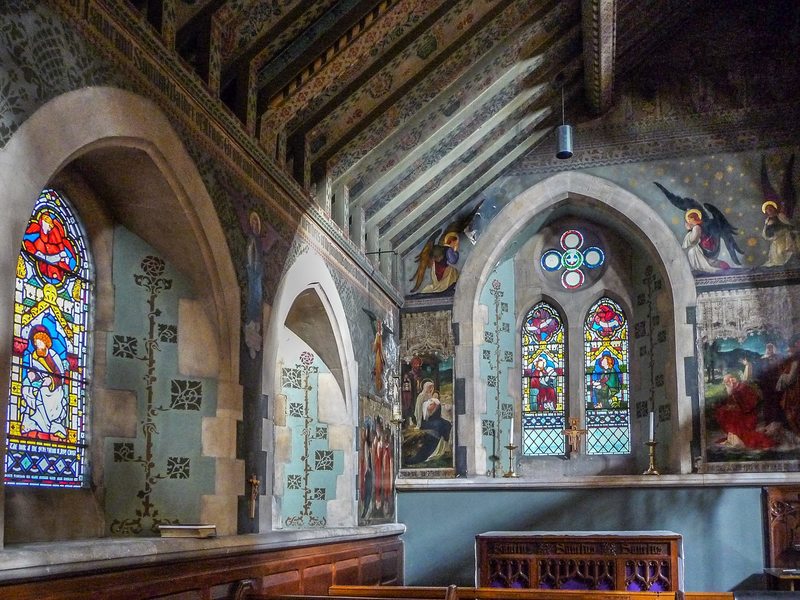 Christ Church was built in 1862. Designed by Sir George Gilbert Scott in the early English architectural style, it has a large chancel which is integrated with the nave by a high chancel arch. Scott was particularly influenced by the ‘decorated’ Gothic style of the late 13th and early fourteenth century which is reproduced in small scale in Christ Church Southgate. The building is listed as Grade II* and includes Pre-Raphaelite stained glass windows by the Morris firm with designs by William Morris, Burne Jones and Rossetti.

In 1859, the vicar, the Rev. James Baird held a meeting to consider the building of a new church to replace the Weld Chapel and accommodate the growing congregation. As a son-in-law of the Walker family, he was in a good position to direct their charitable efforts to the building of the new church. The church was built by public subscription and with the help of the Walker family.

The cornerstone of the church was laid on Saturday, 29th June 1861 and the new church was consecrated on 17th July 1862 by the Lord Bishop of London, Dr.Tait (later Archbishop of Canterbury). It was constructed in just over a year and cost £11,689.5s.8p.

The Weld Chapel was demolished in 1863 and its site remains marked in the old churchyard outside the West Door of the church (the enclosed area for burying cremated remains roughly delineates its ‘footprint’).

Minchenden Oak Garden is a remnant of the estate of Minchenden House, owned in the C18th by the 3rd Duke of Chandos and later the Marquis of Buckingham. By 1836 the estate was sold to the Walker family and the grounds incorporated into their Arnos Grove estate. The old mansion was demolished in 1853 although a smaller house, Minchenden Lodge, was built in the mid C19th to the north.

A relic of the Minchenden House grounds remains in the form of the Minchenden or Chandos Oak, an ancient pollarded oak tree, reputed in the 19th century to be the largest in England. The Garden was created by Southgate Borough Council as an evergreen Garden of Remembrance and opened on 12 May 1934.