This event was in the past. For current and future events visit our What's On Page.

The Southgate Club, 17 Chase Side, N14 5BP (Entrance is in Crown Lane) 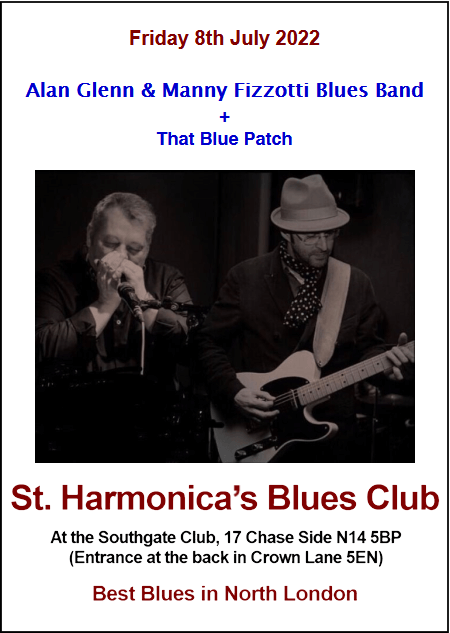 It is a real pleasure to welcome Alan Glen and Manny Fizzotti this Friday to play us some serious blues. Neither of them are strangers to St Harmonica’s but it is a thrill to have them play together in the same band. Alan Glen, one of the British top blues harmonica players, is best known for his work with the Yardbirds, Nine Below Zero and Little Axe. He has played on over 50 albums, and recorded/performed with: John Mayall, Zoot Money, Alannah Miles, Jeff Beck, Steve Vai, Slash, Steve Lukather and Skunk Baxter. He also played with Peter Green, Paul Jones, Junior Delgado and Hubert Sumlin at the Long Beach Blues Festival and recorded the album On The Road Again with Dr. Feelgood.

Manny Fizzotti is one of the nicest guys around, and one of the busiest artists on the London blues scene. He graduated “with honours” at the Guitar Institute of Technology in Los Angeles, where he also played as a session guitarist at Shanghai Recording Studios, working with Mike Carnevale (engineer for Eric Clapton, Greg Allman, Jeff Beck and Keith Richards) and performed at famous blues clubs such as Harvelle’s in Santa Monica. Since moving to London in 2011 he performed at well known clubs such as Ronnie Scott’s Bar, the 606 Club, the Bull’s Head, the 12 Bar Club, the Troubado”, the Boom Boom Club, The Hideaway, the Ain’t Nothin’ But Blues Ba” and the Eel Pie Club, and he had the pleasure of being invited to play with Giles Robson, the John O' Leary and Alan Glen All Stars, the Dennis Greaves Band, Nine Below Zero and the great Chicago blues ambassador Billy Branch.

Support begins at 8.30 with our favourites Ruth & Dave as ‘That Blue Patch’

Tickets are £10 in advance, or on the door (subject to availability):

The Southgate Club, 17 Chase Side, N14 5BP (Entrance is in Crown Lane)

Sisters, Sirens and Saints: Imagining the Women of Beatrice Offor

Fore Street for All: Black heritage and future dialogues

Free cycling session for over 50s in Bush Hill Park

Music from the Black Barn: The Skatonics

The New River Dixielanders at the Southgate Club - free entry

Meeting of Enfield Council - including discussion of local plan petition

You Have a Voice! Learn to project your voice and personality

The Total Who Show at the Southgate Club

Writing masterclass with Nazrene Hanif: Writing at the Intersection

ELODS present Me and My Girl

Open mic night at the Woodman with That Blue Patch

A Little Bit of Everything Sale at St Stephens BHP

Meeting of the Enfield Transport Circle

Southgate Symphony Orchestra: 2B or not 2B

Writing masterclass with Travis Elborough: A Sense of Place

Writing masterclass with Jehane Markham: Poems of the City

Snow White and the Seven Superheroes (not every day)