August's Enfield Dispatch is out

Issue 11 of the Enfield Dispatch is now available from hundreds of locations across the borough, so go and pick up your copy. You can also get it delivered to your door by becoming a member.

This month the Dispatch has launched a special new advertising deal for small businesses. For just £90 you can buy a box advert on a dedicated page for local traders – and they'll even design it for you! Just send them your business logo, up to 50 words of text, and your contact details. Email our advertising salesperson Klaudia on to buy your advert for the September edition.

Our local community newspaper has also just launched a readers' survey, which is your chance to tell what you think about the Dispatch and whether there's anything you think they could do better. You can find the survey at enfielddispatch.co.uk/survey.

The deadline for the next edition is Tuesday 20th August. If you'd like to suggest an article idea please email .

What's in the August Enfield Dispatch? 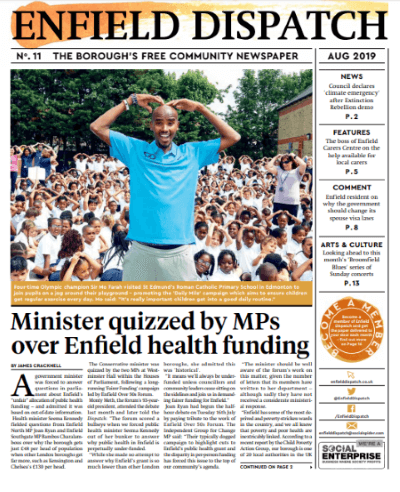 The top story is the government minister being quizzed by MPs over Enfield's "unfair" public health funding allocation - and admitting that it's based on out-of-date information.

On Page 2 following protests by Extinction Rebellion, the council has declared a 'climate emergency'.

On Page 5 the boss of Enfield Carers Centre explains what help is available for local carers.

On Page 6 TfL's proposals to build on station car parks get slammed.

On Page 8 an Enfield resident argues why the government should change its spouse visa laws.

On Page 13 there's a look ahead to this month's 'Broomfield Blues' series of Sunday concerts.

The latest webinar published in the GlobalNet21 YouTube channel is an interview with Councillors Dinah Barry (Winchmore Hill) and Derek Levy (Southgate), two of four councillors who have this year left the Labour Party because they disapprove of the way the Labour Party Group in Enfield is being run. Read more

Thanks for more support from local advertisers, the October Enfield Dispatch has 20 pages instead of 16. Read more

Southgate Green councillor Daniel Anderson's appeal against a finding that he bullied council officers has been dismissed by Enfield Council's Conduct Committee, which met on 23rd September. Read more

The September issue of Enfield Dispatch has been published. You can read it online or pick it up at one of the many distribution points in the borough. Read more

The top story in August's Enfield Dispatch is the indefinite postponement of long-awaiting upgrades to the Tube and rail services. Read more

Southgate Green councillor Daniel Anderson today became the third Labour member on Enfield Council to leave the party. He joins fellow former Labour councillors Derek Levy (Southgate) and Dinah Barry (Winchmore Hill) in the new Community First group on the council. All three have stated that they remain committed to the Labour values that they were elected on, but can no longer work with council leader Nesil Caliskan. Read more