As UK doctors call for lower speed limits to reduce the pressure on health services, London's top traffic cop has gone online to plead for slower driving and to highlight examples of criminal behaviour by drivers taking advantage of clearer roads to flagrantly breach speed limits.

Detective Superintendent Andy Cox serves with the Met's Roads and Transport Policing Command and is London's police lead for the Vision Zero road danger reduction campaign. He has been responsible for increased police action against "boy racers" using the A10, A12 and A13 as race tracks. In a recent video on Twitter he speaks emotionally about the unnecessary strain on the NHS brought about by hospitalisations caused by collisions.

Drivers, we are out there, every single day... I urge you to respect, at this precious moment, our NHS, police and fire service.

Addressing London drivers directly, he mentions a speed of 134mph in a 40mph zone and average speeds in 20mph zones of 37mph - when these zones are used by key workers on bikes or on foot. He says that speeding is the biggest cause of fatal collisions in London - and fatal collisions require heavy use of NHS, fire brigade police resources. Drivers causing serious collisions could be depriving a Coronavirus patient of a hospital bed.

With some very high speeds in #London increasing risk of fatal & serious crashes which would add pressure to the #NHS #Police #Fire causing potential knock on impact to #Covid19 patients. I have recorded a message appealing direct to drivers to slow down, drive safely & lawfully. pic.twitter.com/dJyTMWzBhs

A 20mph speed limit to "lower the baseline NHS curve"

In a letter sent to the Times on 22nd March Dr Robert Hughes (London School of Hygiene and Tropical Medicine) and 109 others wrote:

In a British Medical Journal blog on 24 March addressing ways to reduce pressure on the NHS Dr Sunil Bhopal and four other experts wrote:

“First, we suggest an immediate reduction in motor vehicle speed limits. In England alone there are around 35,000 non-fatal admissions to hospital every year related to road traffic accidents; more than one in 10 of these are serious and likely to require intensive support, including anaesthesia and surgery. Evidence from around the world shows that lowering speed limits can lead to major reductions in injuries. In Canada, for example, lowering the speed limit from 40km/h to 30km/h was associated with a 28% decrease in pedestrian-motor vehicle collisions and a 67% decrease in major and fatal injuries.

"This measure would be particularly important in supporting those who follow government advice and avoid non-essential use of public transport in order to maintain social distancing. We therefore suggest that the government urgently explore an emergency reduction of all national speed limits to 50mph, and to 20mph in urban areas.”

20mph is coming... We can either do it now or do it later. But if we do it now, the NHS gets that slowdown bonus.

A new video by Rod King of the 20's Plenty campaign echoes the doctors' plea. 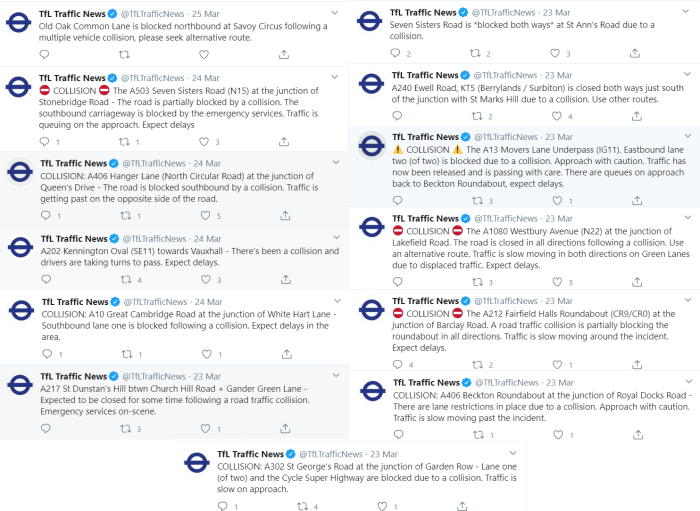 Can we improve the NHS’s ability to tackle covid-19 through emergency public health interventions?

Lower the baseline demands on our NHS

The Enfield Dispatch reports that a Palmers Green resident was only able to tested for Covid-19 at Lodge Drive car park by applying online using a Glasgow postcode. Serco employees at the test site were 'milling around' without doing any testing. Read more

Sometimes it can take a childs-eye view to see how we can do things better, and a new competition for young budding transport planners, launched today, is intended to take advantage of this to help us speed up the decarbonisation of transport and in particular of the school run. The national walking charity Living Streets is teaming up with the Transport Planning Society to offer a prize for the best poster designed by a child of primary school age showing environmentally friendly ways to travel to school. Read more

All of us, to greater or lesser extent, shape the world that children have to grow up in. And, without our realising it, our lifestyle and behaviour might be contributing to the problems that lead to so many children growing up obese, unfit, unhealthy and with poor mental health. Instead of blaming their parents, we should consider whether we are part of the problem. Read more

A school street scheme comes into force on Monday 7th September outside St Paul's primary school in Ringwood Way, Winchmore Hill. Between 8.15 and 9.15 in the morning and 2.45 and 3.45 in the afternoon Ringwood Way will be a pedestrian and cycle zone between its junctions with Station Road and Shrubbery Gardens. This normally busy cut-through will be closed to all vehicles other than those with specific exemptions. Read more

With children soon due to return to their classrooms, the issue of how pupils will travel to and from school is becoming urgent. There are serious questions about how many will be able resume using public transport. Across the country the government is telling local authorities that they want at least half of pupils with journeys of less than two miles who have previously used buses to switch to active travel - walking or cycling. In London it's still unclear under what circumstances free public transport will be available to schoolchildren. This article points readers in the direction of some recently published information relevant to school transport in the age of Covid-19. Read more