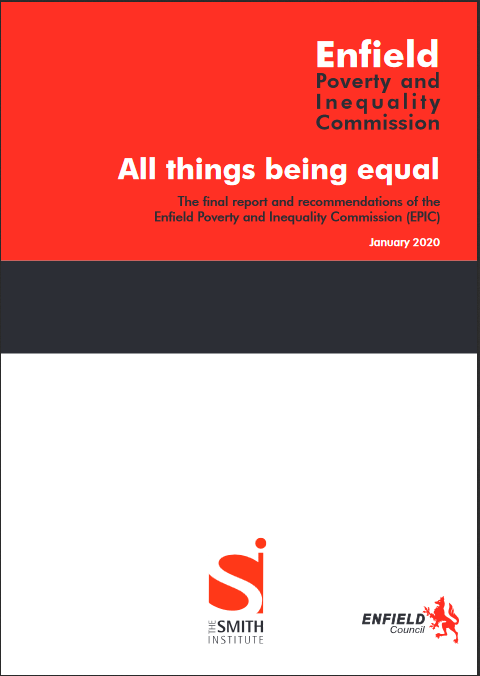 The final report of the Enfield Poverty and Inequality Commission, published in late January, found that deprivation in the borough has increased in recent years and called on the government to review its funding arrangement for local authorities to help them tackle increasing poverty.

The Commission, run by the Smith Institute, made 27 recommendations which it says will make a significant difference to families with the lowest incomes in the borough. They include reforming the private rented sector, improving access to healthcare – including mental health services - revitalising youth services and reducing crime and anti-social behaviour.

Enfield has risen from being the 12th to the 9th most deprived London borough between 2015 and 2019. Just under a third (27 per cent) of households in the borough are in poverty after housing costs and one in three children is living in poverty.

At the launch event, Baronness Tyler of Enfield, Chair of the Commission, said:

"Despite Enfield's historic reputation as a leafy outer London Borough, it is now a place with inner London problems but with outer London funding and infrastructure. This must change.

"The Commission are calling on the Government and the Mayor of London to recognise the growing poverty in outer London and look again at how public services in outer London are funded so we can reduce poverty and inequality and make sure all people have the opportunity to fulfil their full potential, regardless of their background.

"Enfield is a vibrant, diverse and young borough which has huge energy and potential. But to release that potential local government, national government, local public services and the voluntary sector must come together to remove the barriers they face.

"One barrier the Commission was particularly worried about is the lack of affordable housing in Enfield. The Council have ambitious plans to build more affordable homes but without more grant funding for local authorities to build, this will take time.

"As a consequence many poorer families are stuck in privately rented accommodation so it's crucial that councils like Enfield have the powers to regulate the local private rented sector (PRS) so it works for all residents."

“Government spending cuts of £179m since 2010 have seriously affected our ability to help those most desperately in need but we will be implementing all the recommendations made by the commission as rapidly as possible.

“At a time when the United Kingdom is more affluent that ever before it is simply unacceptable that we have pockets of crippling poverty in this borough. We have residents relying on food banks and choosing whether to buy food or heat their homes.”

Enfield is home to over 300,000 residents. The Borough is young and diverse and located within a dynamic and prosperous global city. Both the size and diversity of the population has increased rapidly in recent years and is set to increase further. People the Commission spoke to were proud of their diverse and vibrant community.

These are solid foundations for the Borough to thrive and prosper in the coming years. However, realising the potential of the Borough will man tackling the gnawing poverty and inequality.

Meeting this challenge will not be easy after a decade of austerity and the changing spatial patterns of poverty in London which are being acutely felt in Enfield. As the Commission's work shows, a successful future requires shared priorities and inclusive growth. Indeed, over the last four years, Enfield has risen from being the 12th to the 9th most deprived London borough between 2016 and 2019. 27 per cent of households in the Borough are in poverty after housing costs and one in three children are living in poverty.

Over a six-month period, the Commission reviewed evidence, listened to stakeholders and heard testimonies from local residents on the challenges and possible solutions. Based on this evidence the Commission has set out twenty-seven recommendations which it believes will make a significant difference to the lives of Enfield's poorest residents and help the Borough continue to be an attractive and inclusive place to live.

The Council have ambitious plans to build 19,000 homes over the next ten years with half genuinely affordable in relation to earnings. In the meantime, privately rented housing will continue to play a major role in housing those on lower incomes. The council should move ahead with a licensing scheme for landlords to increase the quality of accommodation whilst also reducing unfair evictions and discrimination against tenants claiming benefits, and an end to the 'no DSS' culture.

Serious youth violence is a huge concern across London and in Enfield there is more than one such incident every day. Many London Boroughs have been forced to cut their youth service budgets because of cuts from central government. The Council should take an early intervention approach to keeping young people safe and help them make positive life choices by prioritising investment in youth services and outreach work.

It is crucial that children from poorer families are not discriminated against because of their lack of familial resources. The Council and local schools -pshould work together to make sure all of Enfield's schools are 'poverty-proofed', restoring a uniform grant, eliminating period poverty and removing the stigma of growing up in poverty.

Set a target to reduce low pay within Enfield

One in five workers in Enfield are on low pay, twice the London average. Poverty reduction should be at the heart of the new economic development strategy, which should set a target to reduce low pay within the Borough. In setting out its ambition to create future prosperity in the Borough, the Council and public sector partners should show leadership by ensuing the London Living Wage is paid.

Discuss this article
Log in to comment
Posts in discussion: Report calls for government funding to tackle growing deprivation in the borough

PGC Webmaster posted a reply #5217 10 Feb 2020 00:53
In its monthly email newsletter , Enfield Voluntary Action (EVA) carries a summary of the poverty report, highlighting sections of the report where voluntary and community sector organisations can make a difference. To follow the links in the summary below, read the newsletter online.

"The recommendations are a good start to the work of addressing poverty & inequality in our Borough. We will continue to work on more detailed plans and I believe the report provides a framework to enable and strengthen the voluntary sector's long-standing contribution to addressing poverty & inequality in our Borough". Jo Ikhelef, EVA Chief Executive, who sat as a Commissioner.

Many of the other recommendations for Council action relate to projects which should involve local community groups, including health & wellbeing, play streets, reduction in crime & anti-social behaviour, revitalising youth services, maximising the use of libraries, employability for diverse communities, and extension of benefits & debt advice (see Voluntary Sector Homelessness Network & Debt Advice Project).

The Council has stated on its website "Enfield Council will work with its partners to implement all the report’s recommendations."
See all comments

A petition to the government started by Manchester United footballer Marcus Rashford has so far gathered more than 250,000 signatures Read more

The latest webinar published in the GlobalNet21 YouTube channel is an interview with Councillors Dinah Barry (Winchmore Hill) and Derek Levy (Southgate), two of four councillors who have this year left the Labour Party because they disapprove of the way the Labour Party Group in Enfield is being run. Read more

In March, despite protests, Enfield's cabinet agreed to go ahead with a plan to set up a centralised children and families hub on the first and second floors, despite, it seems, not having identified a suitable new home for the borough's well regarded archives and local history library. Ever since local the Enfield Society and other civic sector organisations have been seeking in vain to enter into satisfactory dialogue with the council about this. They have now published an alternative plan which, they say, would not only allow the museum and archives to remain at the Dugdale, along with conference facilities and rooms for hire by community organisations, but would actually save more money than the council's proposal. Read more

Southgate Green councillor Daniel Anderson's appeal against a finding that he bullied council officers has been dismissed by Enfield Council's Conduct Committee, which met on 23rd September. Read more

Enfield Council is making changes to arrangements for collection of waste and recyclables. Aluminium foil and carrier bags can now be recycled, but from 5th October households will no longer be able to put out extra bags of general waste. Read more

A recently published report into telephone befriending in Enfield during lockdown provides a snapshot of the issues affecting residents in the 'vulnerable' and/or 'shielding' categories and shows the value of telephone befriending and of other services that were provided, such as delivery of food and medicines. Most call recipients were pleased to receive the calls and a core continued to receive these throughout the period, not missing a call. The report recommends that the council should be ready to reactivate the service in case there is a second wave or a local lockdown. Read more