The Heart of the World: A new folk club at the Dugdale

Enfield's new folk club will be programmed by Jacquelyn Hynes

Enfield's new folk club, the Heart of the World, launches on 22nd February at the Dugdale Centre. It will be programmed by distinguished local musician Jacquelyn Hynes and the inaugural session features Brona McVittie and Friends.

Jacquelyn Hynes performs world-wide as a solo artist, in her trio or as a performer with other bands and projects, playing at many major venues. Her Folk/World project Avalonia has featured many leading world and jazz musicians including Najma Akhtar, Stuart Hall, Hossam Ramzi, Zinga Rabhi and Merit-Ariane Stephanos. Her joint collaboration “Celtic Caribbean Crossing” has played to sell out audiences at the irish Cultural Centre this year. She tutors and lectures on flute and folk music at several colleges and universities. For more details see her website www.jacquelynhynes.com. 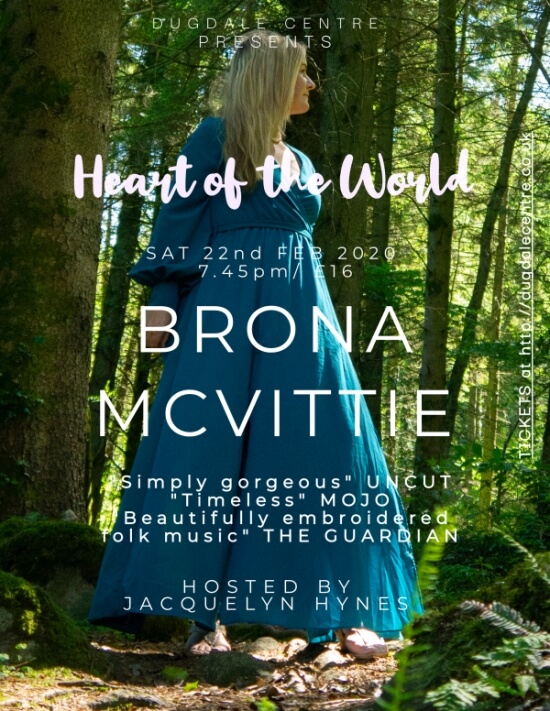 The first guest performer at the Heart of the World is Brona McVittie, whose new single ‘Green Man’ is taking the Folk world by storm.

Decorated with an array of four star reviews singer-songwriter and musician Brona McVittie is deftly steering traditional folk into the 21st century with her recently launched debut solo album - a deep reflection on the interconnectedness of things natural and manmade, an album of duality and dichotomy shaped as much by natural sonic patterning as by human patterns of behaviour — inspired by rural and urban scapes alike.

Brona returned to her native County Down after several years in London, during which time she performed with numerous bands at venues ranging from the 12 Bar Club to the Roundhouse. She was musical director for Celtic acapella outfit Rún, lead singer and harper for the London Lasses and briefly even ran her own folk club. In a variety of guises, she has graced the stages of numerous festivals including Glastonbury, Celtic Connections and Cambridge Folk Festival. In 2019 she performed with her trio at Dublin’s National Concert Hall, Glasgow Royal Concert Hall, London’s Kings Place and Womad festival. She champions folk songs and tales from her homeland both in her own work and as leader of the Mourne Community Choir.

A new single written by two musicians from Palmers Green vividly portrays life on the NHS frontline at the height of the pandemic. Working on the Frontline was written by Kate St John and Neill McColl and is performed by BAFTA-nominated actor and singer Jessie Buckley and her band Jessie & The Leonards. Read more

This is possibly our final playlist in this series, as we plan to return to live music at St Harmonica's on Friday 25 September 2020 (sorry - already sold out!), regulations permitting. It features some of our regular performers, hopefully coming to play for us again soon. We hope you have enjoyed the playlists over the past six months. Read more

Only two weeks until St Harmonica's restarts at the Southgate Club - reserve your seat now. In the meantime, we have another fine selection - Unplugged and Mellow - chosen by Simon Bennett. Read more

Simon Gilbert, former choral director of the Enfield Community Singers, invites everybody to join him to sing for fun at the Dugdale Centre, Enfield Town's top entertainment spot. Read more

Greetings from St Harmonica's Blues Club, Southgate, North London. All being well, we will be re-opening for live music on Friday 25th September 2020. Until then, we'll carry on with the weekly playlists. This week's selections are based on an even bigger list of suggestions from Chris Howe. Hope you enjoy his wide-ranging tastes in bluesy music. Read more

This week's selection was chosen by Mark Olbrich. Read more